Congratulations to Hadley who retained the League Invitational Trophy with a 4-2 win over Bushey.  Thanks again to Graham and all at Rayners Lane for hosting.  Congratulations too to Maccabi who won the SAL Vets Cup with a 2-1 win over Albanians.

In the league the Turkish Masters, having found the going tough, have conceded their final few fixtures.  We wish Oz and his players all the very best and thank them for efforts this season.  1-0 wins awarded to Bushey (x2) and Jamrock.

Congratulations to Dan and all at Maccabi – their hard fought 2-0 win away at Interwood saw them crowned league champions for the 1st time in their history.  Their consistency over the season, losing and drawing just once, makes them worthy winners. 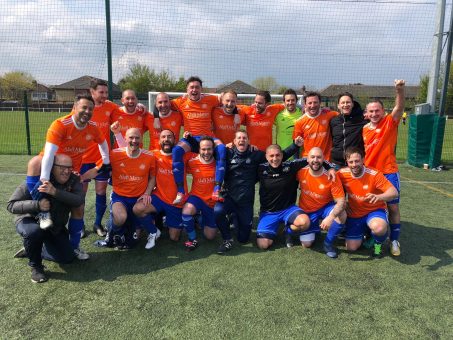 In the cup Bushey overcame Tansley 1-0 to book their place in the cup final that takes place at Rayners Lane on 28th April at 3pm.  Please get across to support what should be a great match as they take on the holders Hadley.

Elsewhere in the league:

In midweek, Interwood narrowly lost out in the final of the Middlesex County Cup to the exceptional side that are Middlesex Wanderers.  By all accounts was an excellent performance from Albie’s side and a terrific game.

In the league at the weekend:

Congratulations to Tony and his Walthamstow Team who successfully retained the Essex County Veterans Cup on Sunday with a 2-1 win over Laindon in the final.

In the league cup, Hadley remain on course to retain the trophy they won last year but only after a crazy game in which, having trailed 2-0 and 3-1, they scored very late on to record a 6-5 victory over Garston.  They will play the winners of the match between Bushey and Tansley in the final on the 28th April at Winchmore Hill’s ground.

Meantime in the league:

The Invitational Cup semi-final line up was finalised on Sunday with Tansley, overcoming Maccabi 4-3 in extra time, booking a berth alongside Bushey for the right to play either Hadley or Garston.

Elsewhere, in the Middlesex County Cup semi-finals, there was mixed fortunes for our clubs, with Jamrock falling just short but Interwood progressing to the final

In the league meanwhile:

Congratulation to John and his Garston side who won the Herts County Cup Final  3-1 on penalties, defeating Hadley after the game finished 2 apiece after extra time.